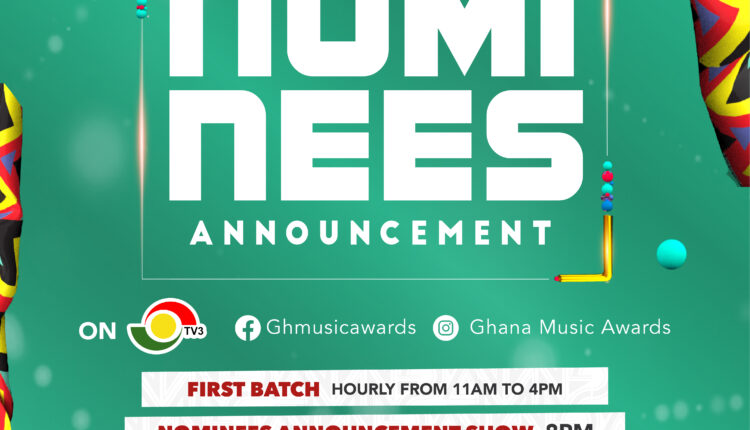 On 19th January 2021, a call was made to all Artiste, Music Producers, Beat Makers, Instrumentalists and Stakeholders to submit their works which fall within the Vodafone Ghana Music Awards (VGMA) calendar year – January 1st to December 31st 2020. The VGMA board and the research team, have been at work, rigorously sifting through, meticulously reviewing and carefully analyzing over 1000 submissions; a verdict has been reached and a list is ready for unveiling.

Approximately 6 weeks after entry submissions closed, the biggest event on the Ghanaian Music and entertainment space is set to make the BIG ANNOUCEMENT. On Saturday the 3rd of April, the unveil of Nominees will happen in 2 parts. From 11am to 4pm, 3 categories will be announced every hour, on the hour.

This will be followed by a Nominees Announcement ceremony at 8pm, where the final set of nominees will be unveiled, the event calendar for the year will be the shared, and what’s new to the scheme will be announced. The ceremony will be interlaced with sizzling performances from your favorite artistes.

Catch the hourly announcements (11am to 4pm) and the announcement ceremony (8pm) on TV3, and all Ghana Music Awards Social Media Pages.

The 22nd Vodafone Ghana Music Awards is proudly brought to you by Vodafone, with support from TV3, KPMG, DStv, Mentos, CloseUp and powered by Charterhouse.